The sun is shining, not a cloud in the sky, and high above the earth an aeroplane is painting a fine, white contrail against the blue sky, which, like the aircraft, is only visible for a few fleeting moments. Nobody knows where the plane is headed. Nobody? No, far from it. Thanks to Flightradar24, you can find out exactly where the Airbus or Boeing is flying to. If you’ve always wanted to know what air traffic looks like over your nearest city or over New York, then this service is just what you’ve been waiting for. It also provides additional information that can be useful for travellers and their families, as well as for a range of hobbies.

From a hobby to a market leader – the emergence of Flightradar24

Are you interested in what is happening in the sky above you? If so, then you share the same interest as two Swedish plane enthusiasts. They were also curious to know which aircraft was flying over the heads at any particular moment and wanted to know the destinations of those unknown aeroplanes. At the time, however, it was impossible to get hold of that information. What they did know, though, was that each aircraft is fitted with a transponder, which sends details about the aircraft’s speed, the flight path and the current altitude.

Most airlines use a technology called ADS-B, which is an abbreviation of ‘Automatic dependent surveillance – broadcast’. The two Swedes wanted to make use of the information provided via ADS-B and put their plan into practice. That’s how the idea of Flightradar24 was born.

The technology behind Flightradar24

Realising their plan sounds simple, but required a considerable amount of effort. In 2006, the founders of Flightradar24 began to set up ADS-B receivers in Europe, and later all over the world. This granted them access to the unencrypted data sent by a large number of planes. The incoming information was uploaded directly to the internet and visualised on the Flightradar24 website. The service still works the same today. Nevertheless, the name is a little misleading, as the technology used has very little in common with a radar in the conventional sense of the word.

Radar is usually used by airports and military reconnaissance facilities to actively detect flying objects. This means that machines which do not emit any signals can also be detected. The result, however, is very similar, which is why the name Flightradar24 is ultimately still suitable. All recorded aircraft movements are visualised on a map.

How does Flightradar24 work?

If you want to access the data provided by Flightradar24, then all that you require is an internet connection and a device on which to view the data. The website can be viewed on a PC or laptop, or just as easily on a tablet or smartphone – a dedicated App is available for mobile devices. The only requirement is having Java and Flash activated on your browser, as these are required in order to display the interactive map.

Your first glimpse of air traffic

If all of these requirements are met, upon opening the website you will be greeted by a map area with a multitude of yellow symbols, each of which represents an aircraft in flight. What initially looks like a disorderly and chaotic ant colony is actually the current air traffic over Europe, Germany or America. The region displayed varies based on the map area setting. If you’re ready, you can start tracking flights straight away.

How do you use Flightradar24?

Using Flightradar24 is comparatively simple. There are nevertheless various tools for controlling the map, which you should familiarise yourself with step by step. Eventually you will be able to navigate through the programme confidently and without even thinking about it.

Resizing and dragging the map

In order to give yourself an overview and familiarise yourself with navigating around the map, you should first of all resize your chosen map area. Typically a section of airspace covering a very broad region around your location is usually displayed first. Clicking on the ‘Magnify’ button, represented by a plus (+) icon, will make the section smaller. This reduces the number of aircraft displayed and immediately gives you a clearer view. When using Flightradar24 on a mobile device, you can zoom in the usual way using the touch screen.

To move the map section further North, South, East or West, click and hold on the map with the mouse or on the touch screen and drag it accordingly. You have now adjusted the map to track the particularly flight that you are interested in.

To view the details for a particular aeroplane, click on the corresponding symbol on the Flightradar24 interactive map. This opens an information window with a number of interesting details. This allows you to see, for example, which cities the plane is flying between. The airline, aircraft type and flight number are also displayed. Scroll down a little further and you will find live information about the speed and altitude of the aircraft and the calculated arrival time at the destination airport. Many aircraft also have a picture for plane enthusiasts to enjoy. If you look closely, you can even recognise individual elements such as red wings or painted advertising strips from the ground.

Targeted searches for airports and regions 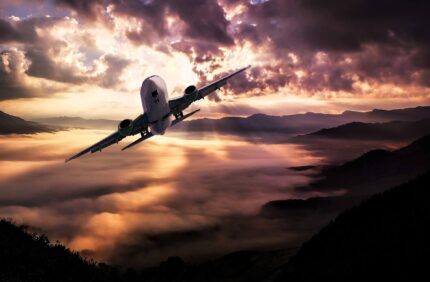 If you’re interested in which planes are flying through your area at any particular moment, you can also search for specific airports. To do this, enter the name into the search box and the map section on Flightradar24 will instantly be updated accordingly. If your village, town or city does not appear on the map straight away, simply drag the map a little until it shows the correct area. If you set the map section to a radius of just a few kilometres around your location, you can actually track almost all of the civil aircraft in the sky above you.

Would you rather know where a specific plane is at a particular time because your relatives or friends are on board? Flightradar24 is also able to do this. Instead of an airport, simply enter the corresponding flight number into the search box. If an aircraft matching the given description is currently in the air, the map will focus on that plane and you will be able to view all of the information available at this time.

Where else is this technology used?

The technology behind Flightradar24 is certainly not limited to aeroplanes. Other modes of transport use transponders too in order to convey their current position. In addition to the flight radar, a ‘ship radar’ can also be extremely informative. Passenger ships, container ships and ferries send the same kind of information – obviously there is no altitude reading, though, and there is quite a difference between the speed of an aeroplane and that of a ferry. In all other respects, the technology works in exactly the same way.

For rail traffic, there is the train radar. However, a different technology is used here. Train radar often uses publicly available railroad data sources. The position of the trains is displayed on a map using this timetable data. This has the disadvantage that the radar does not display real-time information. Occasionally, however, there are also GPS-based offers, but these are in the minority.

Who is Flightradar24 aimed at?

What Flightradar24 is able to offer is aimed at three major groups who might have an interest in it: Plane enthusiasts, hobbyists and airline passengers and their families. Essentially, the service is available free of charge to anybody with an interest in the information it provides.

Bring the tower into your home

People with a keen interest in aeroplanes, airspaces and modern aviation will be very excited by what Flightradar24 has to offer. What was previously only possible in the form of game-like simulation software is now accessible, live and real: Tracking flights and observing an airspace from the comfort of your own home. If you wish, you can virtually step into the control tower for as long as you want without having to take on any responsibility. Affectionately known as ‘plane spotters’, aeroplane enthusiasts have already uncovered a range of interesting information. Flightradar24 therefore allows you to see almost immediately if an airline has changed a flight path, for example, either due to a storm or some other event.

Where hobbies are concerned, two groups in particular are able to benefit from using Flightradar24: Plane spotters and drone pilots. The former are always on the lookout for a unique photo of a particular machine on the ground, in the air, on approach or while landing. Perhaps you share this enthusiasm for tracking aircraft?

Thanks to Flightradar24, you no longer have to stand around in the rain for hours on end if a rare aeroplane is due to land in your area. By following the flight, you stay up-to-date and work out exactly when the plane is due to arrive. This is often how rare machines are discovered in the first place. But if you’d rather get off the ground yourself with a drone, Flightradar24 is also a very helpful service in this respect. You can immediately see whether the air space above you is free or whether you might be restricted by other air traffic. The App will be of particular interest for hobbyists, as it can be used to view a wide range of information while out and about.

When will the family be home? 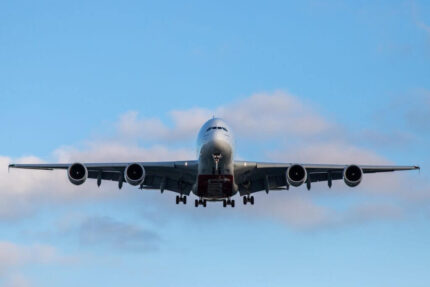 Flightradar24 offers a fantastic benefit for air travellers and their families. The latter can call up the website on a screen and check that all is progressing smoothly with the flight. Even delays are indicated in real-time. If you have to pick up relatives or friends from the airport, Flightradar24 can keep you up-to-date as to exactly when you should set off.

Along with providing peace of mind for the family members on the ground, the service is also interesting for air travellers themselves. The details of delays published by Flightradar24 are usually more accurate and more up-to-date than the information provided at the airport.